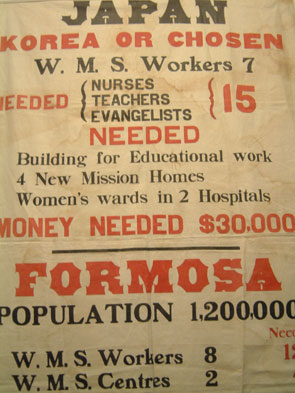 Then as now, audio visual materials and techniques played a role in the past life of the church. Slide shows, illustrated talks, films—they were all important tools that ministers, teachers, youth leaders and missionaries used in the church’s ministry. This section of the museum focuses on the role that audio-visual presentations have played in the life of the church over time. Videotapes depicting various aspects of the history of The Presbyterian Church in Canada can be seen on screen.

Examples of early 20th-century lantern glass slide projectors are on display. These 2 ½- inch glass slides were used to project the words of hymns on a screen in what was called an “Open Session,” when pupils of all ages gathered for worship and announcements. The collection also includes sets of glass slides that missionaries used when they came home on furlough and gave illustrated talks on their experiences overseas. On the walls, there are examples of religious posters, one original “broadsheet” advertises a 1918 illustrated talk.

In the 20th century, glass slides gave way to 35 mm, and the church distributed slide series illustrating such themes as stewardship, missions, Christian education and evangelism. Some of the 35mm sets were organized as filmstrips. Others were boxed individually and accompanied by a written script. The Museum also features examples of the various projectors that the church used to publicize her life and mission.

Also, the museum has steel engravings, diplomas and scrolls, as well as photographs of individuals and historic events, such as a composite photograph of the General Assembly of 1875.