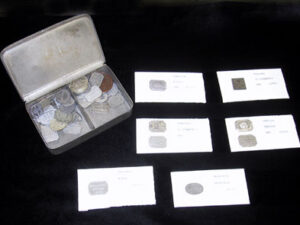 The use of “tokens” – symbols of membership in the company of believers – goes back to the first centuries of the Church, when Christians faced persecution for their faith. In those days, the security of the congregation depended on having some sort of pass or identification that followers of Jesus could bring forth in order to participate in the sacramental services. Such identification might take the form of a little metal fish, usually with a hole pierced in it, like an eye, so that it could be easily carried. The use of tokens was adapted in later centuries as a symbol of full membership in the Communion.

Christians took seriously the exhortation not “to eat and drink damnation to themselves,” and the greatest care was taken to ensure that no unworthy person or unbeliever was admitted to the Holy Communion. In Scotland, following the Reformation, the community might share the bread and wine only once a year. Members of the church took the sacrament very seriously and approached the sacramental season – the most important time of year – with solemn excitement and anticipation. They carefully prepared themselves for partaking of the bread and wine by attending a series of preparatory services. Following the last such service on Saturday afternoon, metal tokens were given to the people “of the Way,” those who were deemed worthy to take communion. On the following day, the minister and elders gathered these tokens, inviting everyone who presented the symbol to come forward and sit at the Lord’s Table. 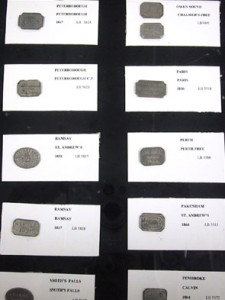 By the end of the 19th century in Canada, the communion token or “Ticket of Admission” became merely a symbol of attendance at commumion services, and persons without the metal disk were not excluded from the Lord’s Table. Indeed, by 1900, most congregations had substituted a communion card for the metal coin, and Elders distributed these to members in their respective districts before the Sacramental Sunday. The card usually displayed the name of the communicant and, when collected before the service, formed a useful record of attendance. If a person, lacking sufficient reason, was absent from the Lord’s Table for several years, the Session, the congregation’s ruling body, had authority to remove such individuals from the communicant roll of the congregation.

The Museum offers a large selection of varied Communion tokens. Most such tokens were made of lead, although the collection displays coins minted in pewter, silver, white metal, brass and copper alloy. Many congregations produced their own tokens, often engraved with the name of the church, the date of issue and the name of the minister. In later years, congregations which did not want to produce their own tokens had the option of purchasing stock tokens. In 1975, in honour of the centennial of The Presbyterian Church in Canada, 60,000 tokens were minted for use in the celebrations.

A volume illustrating 238 tokens of Canadian origin that are held in the Museum was printed and can be purchased for ten dollars.