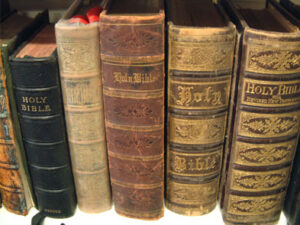 The Presbyterian Church has always looked to the Holy Bible for its “faith and manners”, with tradition playing a very secondary role in establishing doctrinal standards. Presbyterians of the past carried their Bibles to Sunday worship, and every Presbyterian household had a family Bible, often including the “hymn book”, the Psalter, or, the Psalms of David in metre – the only text sung by Presbyterian congregations until the mid-19th century. Many Bibles were ornately bound and included pages for the insertion of family portraits and genealogical records. The church exhorted all members of the family not only to read the Bible on a daily basis, but also to model their thought and behaviour on its teachings.

The Museum’s collection of Bibles, large and small, dates back to the 17th century, and many of them feature steel engravings and coloured prints of individuals and events referred to in Scripture.

The collection also includes many representative editions of Holy Writ, both ancient and modern, including versions in Hebrew, Greek and Latin, as well as the modern languages (German, Italian, etc.) and translations of the Bible from English to other languages (Urdu, Persian, Chinese, Gaelic, Japanese, First Nation), to name but a few. The British and Foreign Bible Society and the Canadian Bible Society, which the Church has always strongly supported, were responsible for many of the translations. However, The Presbyterian Church in Canada itself commissioned several translations for use in its mission fields. 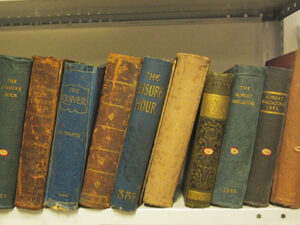 Before the mechanics’ institutes, municipal libraries or the Carnegie libraries came into existence in the late 19th century, many communities had to rely on church libraries for their reading material. Members of the congregation would borrow books for family or individual reading – volumes of high moral and spiritual content such as Bunyan’s Pilgrim’s Progress and the sermons of well-known ministers. In an era in which minimal labour was undertaken and no recreation other than reading was condoned on the Sabbath, these volumes would have been welcomed into many homes. This collection contains many examples of typical congregational library books, along with many hymnals.